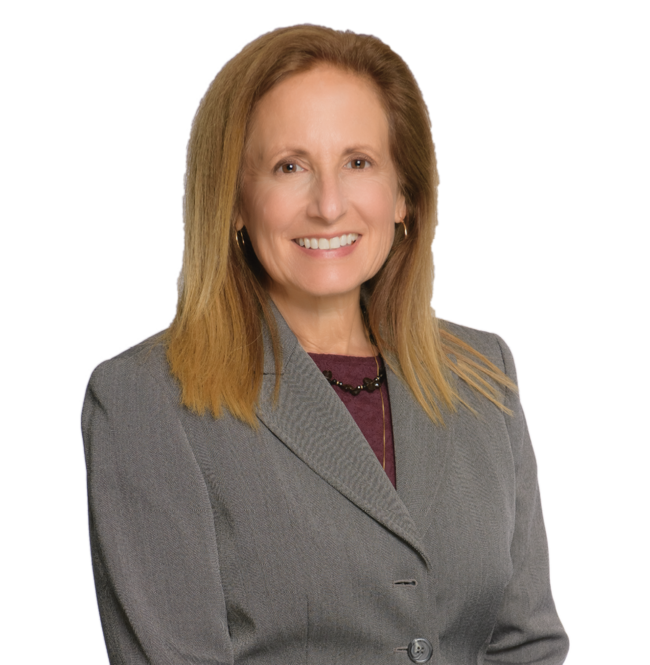 For more than 25 years, Donna Brady has focused on innovative procurement, contracting and finance for infrastructure project development.  She began her career in the firm’s commercial real estate practice, and adds extra value to projects requiring the transfer of property and rights-of-way.

Donna advises state and local transportation agencies in procurement of contracts for highway and bridge construction and operation.  On these projects, she offers special expertise in the area of interoperable electronic toll collection systems.

She assisted the Federal Highway Administration in developing innovative contracting methods for tolling procurements using Intelligent Transportation Systems (ITS), and helped lay the groundwork for the tolling program used by the Orange County Transportation Corridor Agencies.  She also advised the Washington State Department of Transportation on the ITS model for its public-private partnership (P3) transportation facilities, and has assisted numerous other state and local agencies in connection with toll technology procurements.

For several years, Donna served as senior legal counsel at the investment affiliate of a major electric utility, where she advised the company in all aspects of equity and mezzanine investment in domestic and international infrastructure projects, mostly in the energy industry.  She worked on projects in Australia, Bolivia, France, Ghana, Great Britain, Mexico, the Netherlands, South Africa and Switzerland.

Indiana Finance Authority – Louisville Southern Indiana Ohio River Bridges Project.  Key member of the legal team advising on joint procurement of installation, operation and maintenance of the toll system for the East End Crossing, the Kennedy Bridge and the New Downtown Bridge over the Ohio River between Louisville, Kentucky, and Southern Indiana.  Donna’s role includes coordinating with strategic advisors on procurement and project design, as well as drafting and negotiating project documents.

Orange County Transportation Corridor Agencies (TCAs) – Orange County Public Toll Roads.  Key member of the legal team advising these agencies on all aspects of planning, developing and operating their toll road system since 1990.  The TCAs were formed by the California Legislature in 1986 to plan, finance, construct and operate Orange County’s public managed lanes network.  The system was primarily financed with proceeds from toll revenue bonds, reducing the need for taxpayer investment in roadway development.  Nossaman advised on all of TCA’s contracts, including more than $2 billion in design-build contracts and operation and maintenance agreements for toll roads, facilities and systems.

San Francisco Bay Area Water Emergency Transportation Authority – Water Transportation System.  Leader of the legal team that served as general counsel to this statutory regional water transit authority that coordinates publicly operated ferry services in the San Francisco Bay.  Donna assisted the agency in its acquisition of the Oakland/Alameda Ferry Service from the Port of Oakland and City of Alameda, and the Vallejo Ferry Service from the City of Vallejo.  She negotiated agreements between the agency and public ferry service operators to facilitate the transfer of vessels, facilities and equipment to WETA.  The Firm also negotiated and drafted procurement documents for construction of new ferry vessels and the first new ferry terminal in the Bay Area in more than 50 years.  Nossaman represented the agency in the environmental clearance and drafting and negotiation of documents for construction of new ferry maintenance facilities for North and Central Bay operations.  In other work, the Firm drafted and negotiated procurement documents for dredging and for terminal and float reconstruction projects – obtaining the necessary permits and achieving environmental clearance for projects at existing terminals in Alameda, Oakland, San Francisco and Vallejo.

New York State Thruway Authority – Tappan Zee Bridge.  Key member of the legal team that advised on a project Gov. Andrew Cuomo has described as the state’s most pressing infrastructure need – replacement of an aging three-mile-long cantilever bridge over the Hudson River with a new cable-stayed, dual-span structure designed to last a century.  To help deliver the project, Nossaman drafted procurement and contract documents and assisted with the procurement, resulting in a $3.1 billion design-build contract with a Fluor-led consortium – $800 million less than the next lowest bidder – in the first such deal undertaken by the transportation agency and the largest in the country to date.  The contractor started construction in 2013 and opened to traffic in 2017.

California High-Speed Rail Authority – Fresno-to-Bakersfield Segment.  Member of the legal team advising on key elements of the first phase of a planned 800-mile, $68 billion high-speed train system connecting the state’s major urban centers.  Among many assignments, Nossaman has assisted in drafting procurement and contract documents and overseeing the award of a nearly $1 billion design-build contract to a Tutor Perini/Zachry/Parsons joint venture for the first 29-mile civil works section between Madera and Fresno, as well as a $1.37 billion design-build agreement with a Dragados/Flatiron consortium to develop the next 60-mile civil works segment south of Fresno – both at prices well under engineer’s estimates.  Nossaman also has advised the Authority regarding administration of the design-build contracts, procurement of trainsets, and the feasibility of using a P3 approach to project delivery.  We have advised the agency on a wide range of other legal issues, including Surface Transportation Board approvals for the project and state and federal environmental permitting.  Donna advised on the right-of-way and utility relocation contractual provisions as well as technical provisions, and provides review and drafting assistance involving utility master and relocation agreements.

City of Los Angeles, Department of Public Works, Bureau of Sanitation – Hyperion Treatment Plant.  Key attorney working as a member of the City’s project management team advising on a 2014 DBOM contract for a proposed digester gas utilization project within the Hyperion Treatment Plant.  The digester will use gas byproduct from wastewater treatment to generate electricity and steam for use in the wastewater treatment and water reclamation process – reducing the plant’s reliance on the electrical grid.

San Francisco County Transportation Authority – Federal-Aid Contracts.  Member of the legal team working with SFCTA staff to review and negotiate a variety of federal-aid contracts.  Projects included the construction of new on/off ramps from the Bay Bridge onto Yerba Buena Island and a new Bus Rapid Transit System on Van Ness Avenue in the City of San Francisco.

City of Irvine – Orange County Great Park.  Special counsel to the City on a project to transform the former Marine Corps Air Station El Toro into the first great metropolitan park of the 21st Century – the Orange County Great Park.  At 1,300 acres, it will be nearly twice the size of New York’s Central Park.  Donna procured master design, schematic design, program manager and other contracts for the project.  She drafted and negotiated interim leases of base property pending construction, including green waste recycling, agricultural, office and other uses.  She helped coordinate with the master developer of adjacent private projects and assisted the City with master boilerplate construction contract terms and a training program for contract administrators.

Private Developer – South Bay Expressway.  Member of the legal team advising a private toll road developer selected for this project – the first P3 in California.  The South Bay Expressway, a tolled 10-mile stretch of SR 125, runs through eastern Chula Vista between Otay Mesa Road and SR 54 in Spring Valley.  To help facilitate financing for the project during the economic downturn, Donna negotiated complex right-of-way dedications with several major landowners, the City of Chula Vista and Caltrans.  She advised the developer on various other agreements.  The roadway opened in 2007.  In 2011, the San Diego Regional Planning Agency purchased the toll road from the private developer.