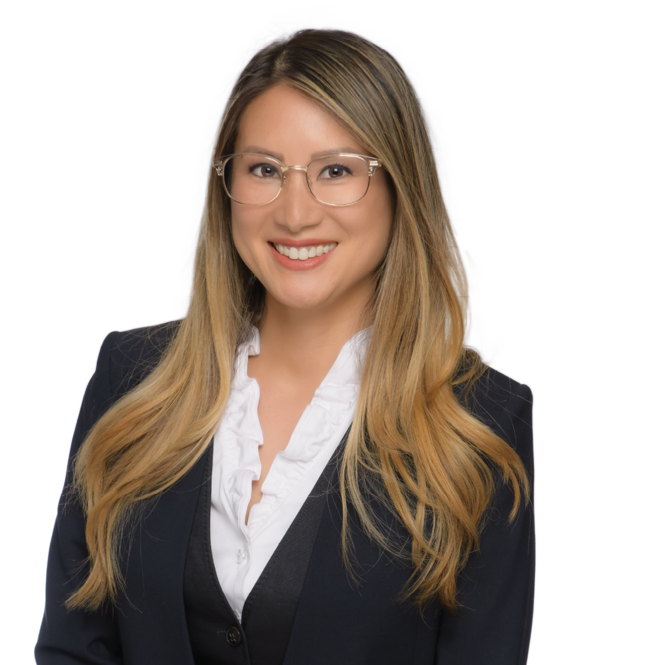 Stephanie Kam is a projects attorney and has worked on infrastructure development and structured financing transactions in North America, Latin America, Western Europe, Africa and Asia. Her experience spans various industries and sectors, including:  transportation, power, renewable energy, aerospace and oil and gas.

Stephanie drafts and reviews procurement and contract documents for the design, construction, financing, operations and/or maintenance of infrastructure utilizing alternative delivery methods such as design-build and public-private partnerships. She is also keenly interested in alternative solutions to traffic congestion. She brings a commercial perspective to her work from her prior training in financial modeling and analysis with the largest international focused project finance team in Canada.

Stephanie is actively involved in leading the firm’s pro bono work for Community Engineering Corps, an alliance of Engineers Without Borders – USA, the American Society of Civil Engineers and the American Water Works Association.

Los Angeles County Metropolitan Transportation Authority – MicroTransit Pilot Project. Lead associate advising on a pre-development agreement (PDA) for pilot microtransit projects under which the selected private partners are now developing software/technology platforms for a network of small transit vehicles to provide on-demand rides between bus and transit stops and customer origin/destination locations. Contracts for the first phase were awarded in 2018. Stephanie assisted LA Metro with drafting contract terms and provisions in the procurement documents and in developing a supplemental contract form for the operations phase of the project.

Hyperloop One – Regulatory Matters. Key member of the legal team advising on federal, state and local regulatory matters for potential development and operation of a high-speed passenger and freight intercity transit facility that would deploy H1’s proprietary hyperloop technology. Stephanie liaised with the U.S. Department of Transportation’s Build America Bureau and provided advice on Federal Railroad Administration jurisdiction and eligibility for federal credit assistance under the RRIF and TIFIA loan programs.

Metro Gold Line Foothill Extension Construction Authority – Metro Gold Line. Lead associate advising the Authority on Phase 2B of the 24-mile Foothill Extension, which will extend the light rail system east to Montclair. Phase 2A of the project, which opened in March 2016, extended the busy line from Pasadena to Azusa and added 11.3 miles of new track along with six new stations and an operations and maintenance facility. In August 2019, the Authority awarded the Alignment Design-Build contract to a Kiewit-Parsons joint venture. The contract includes an $805.6 million base scope for the first nine miles of the project from Glendora to Pomona. Stephanie has assisted in advising the Authority on the design-build procurement and contract for the Phase 2B alignment.

California High-Speed Rail Authority – Fresno-to-Bakersfield Segment. Member of the legal team advising on key legal issues affecting the planned 800-mile, $68 billion high-speed train system connecting the state’s major urban centers. Among many assignments, we assisted in drafting procurement and contract documents and overseeing the award of a nearly $1 billion design-build contract to a Tutor Perini/Zachry/Parsons joint venture for the first 29-mile section and a $1.37 billion design-build agreement with a Dragados/Flatiron consortium to develop the next 60-mile segment. Both were priced well under engineer’s estimates. Nossaman also  advised the Authority regarding procurement of trainsets and the feasibility of using a P3 approach to project delivery. We have assisted the agency on a wide range of other legal issues, including Surface Transportation Board approvals for the project and state and federal environmental permitting. Among other things, Stephanie assisted in providing advice on the procurement of facilities relating to the electrification of the high-speed train system.

Texas Department of Transportation – North Houston Highway Improvement Segment 3 Project. Lead associate advising on what is expected to be one of the largest design-build projects in the history of the United States, valued at approximately $3.6 billion. This project will mitigate congestion and enhance safety in downtown Houston and for 8 of the top 35 most congested roadways in Texas. Stephanie’s duties involve assisting with drafting procurement documents, including contract documents, as well as advising TxDOT in connection with meetings with proposers, responding to proposer questions and negotiating agreements with key stakeholders.

Indiana Finance Authority (IFA)/Indiana Department of Transportation (INDOT) – I-65/I-70 North Split Project. Lead associate advising on the $316 million project that involves a complete reconstruction of the I-65/I-70 North Split interchange in Indianapolis. The Project will improve the safety and operations of the interchange and includes new or replacement of 42 bridges, rehabilitation of 6 bridges, a non-tolled highway and replacement of 27.6 lane miles of pavement. An RFQ for the project was issued in April 2019 and a contract was awarded to Superior Construction Co., Inc. in June 2020. Stephanie’s role includes drafting procurement and contract documents, advising on federal and state requirements, participating in one-on-one meetings and negotiations, and carrying out day-to-day matters with respect to the project.

Arizona Department of Transportation – Phoenix Metropolitan Area Freeway Lighting Project. Member of the legal team advising on the development, procurement and financing of the Phoenix Metropolitan Area Freeway Lighting Project through a DBFOM delivery model. ADOT seeks to upgrade more than 19,000 luminaires from high-pressure sodium to LED technology with remote monitoring and controls, covering approximately 300 miles of controlled access highway throughout the greater Phoenix area, including the Deck Park Tunnel on I-10. Following an anticipated two-year construction/installation period, the concessionaire will then operate and maintain the system to prescribed performance standards for approximately fifteen - twenty years. The procurement commenced in fall 2017. Stephanie’s role has included drafting procurement documents, including sections of the project agreement, and evaluating statements of qualification from proposers.

Illinois Department of Transportation – South Suburban Airport Project. Member of the legal team helping the Department procure a contractor to develop a new airport in the Chicago metropolitan area. The projected cost of the initial phase is approximately $700 million. The Department is in the process of acquiring right of way and developing procurement and contracting strategies for the 5,800-acre airport. Stephanie’s services include reviewing the enabling legislation and preparing a memorandum on the P3 procurement process.

Orange County Transportation Corridor Agencies (TCAs) – Orange County Public Toll Roads. Member of the legal team advising these agencies on their procurements and contracts. Formed by the California Legislature in 1986, the TCAs plan, finance, construct and operate Orange County’s public toll road system. Proceeds from toll revenue bonds primarily financed the system thus reducing the need for taxpayer investment in roadway development. Nossaman advised on all of TCA’s contracts, including more than $2 billion in design-build contracts and operation and maintenance contracts for toll roads, facilities and systems. Stephanie’s assignments have included legal research as well as review and drafting of procurement and contract documents.

Puerto Rico Public-Private Partnerships Authority – Energy Storage Systems Project. Nossaman was engaged by the Puerto Rico Public-Private Partnerships Authority to advise on the procurement of a utility-scale battery energy storage system in multiple locations throughout the Commonwealth of Puerto Rico. The system is intended to provide on-demand energy capacity and support Puerto Rico’s recovery efforts in the wake of the devastation to the island brought by Hurricanes Irma and Maria in the fall of 2017. The contractor will be responsible for financing, furnishing, installing, operating and maintaining the battery storage system and will be paid monthly capacity payments. Stephanie has reviewed the Puerto Rico Electric Power Authority’s standard power purchase agreement and participated in drafting the project agreement and direct agreement.

Philippine National Railways and Department of Transportation – North-South Railway Project South Line. Primary member of the technical team that advised on the largest P3 project ever tendered by the Government of the Philippines. The $3.8 billion DBFOM project is based on an availability and revenue payment based model and has been highlighted by the World Bank as one of 15 key projects for ASEAN connectivity. Comprised of a 56km commuter line, 478km long-haul line, and two long-haul line extensions totaling 175km, the NSRP South Line is expected to be the sole rail backbone connecting Metro Manila to currently underserved areas in Southern Luzon and will also provide a link to Metro Manila’s existing urban rail systems, bus rapid transit, and integrated transport system. Stephanie participated in one-on-one meetings with potential bidders, attended the lenders’ conference, and assisted with the drafting of procurement and contract documents.

Republic of Rwanda, Republic of Burundi, and the United Republic of Tanzania – Dar es Salaam-Isaka-Kigali/Keza-Musongati Railway Project. Leader of the legal team that advised on the construction of a new international standard gauge railway, which will largely run parallel to the existing meter gauge railway between Dar es Salaam to Isaka and provide a new rail link between the 3 countries, connecting Isaka with Kigali and Keza with Musongati. The $5.2 billion railway line is approximately 1,661km and may unlock the vast mineral resources in the hinterland by providing lower transport costs to the port of Dar es Salaam. Stephanie researched and prepared memoranda for the Rwanda Transport Development Agency and drafted procurement and contract documents for the Tanzanian segments between Dar es Salaam and Isaka.

Kenya National Highways Authority – Nairobi Southern Bypass Toll Road. Primary member of the legal team for the concession of the operation and maintenance of one of the first toll roads in Kenya consisting of a 4-lane dual carriageway is 28.6km in length, with 12km slip roads and 8.5km service roads. The NSB has been identified as a high priority by the Government of Kenya to alleviate traffic congestion in its capital and the second largest city in East Africa. Stephanie’s services included reviewing enabling P3 legislation, assessing project risk, and producing procurement and contract documents.

Federal Ministry of Agriculture & Rural Development – Concession of 33 Silo Complexes in Nigeria. Leader of the legal team that advised on the concession of the operation and maintenance of 33 grain silo complexes ranging from 11,000 to 100,000 metric tons with a total combined storage capacity of 1.3 million metric tons. These silo complexes have acted as storage infrastructure of the Strategic Grains Reserve Department to minimize post-harvest losses and provide the first line of defense during food crises. Stephanie’s services included producing the P3 procurement and contract documents.

Zambia Electricity Supply Corporation – Kafue Gorge Lower Hydro Project. Key member of the legal team for the design and construction of a 750MW hydroelectric power station. The project will increase electricity production in the country by 38% and address the growing demand for electricity in the country. The EPC contract was awarded to Sinohydro Corporation in 2015 and is being financed by the Zambian government and foreign financial institutions including the Exim Bank of China. Stephanie reviewed the enabling legislation and assessed the project risks.

CPCS Development International Ltd – Jigawa Solar Park. Primary member of the legal team for the development of an 80MW AC grid connected solar PV project that will provide clean power to over 200,000 households and a stable source of electricity to enable economic development. Following the signing of a 20 year power purchase agreement with the Nigerian Bulk Electricity Trading Plc, the project company entered into a joint development agreement with Scatec Solar. The project sponsors are working with lenders and the World Bank to secure required project documents and implement a Power Sector Recovery Program for Nigeria. Stephanie served as general counsel on all legal matters arising from the project, including drafting and negotiating contract documents.

Export Development Canada – BioAmber Sarnia. Key member of both the legal and underwriting teams acting for the lead lender of a CA$20 million commercial project finance facility. The limited recourse non-revolving term loan was used to complete the construction of the world’s largest bio-based succinic acid production facility and fund its startup and commissioning. The Sarnia plan is a joint venture with Mitsui & Co. and is unusual in that it uses sugar instead of fossil fuel to produce a building block chemical for a variety of products. Stephanie assisted with the negotiation of credit documents and developed a cash flow model to validate financial projections and evaluate coverage ratios using sensitivity analysis.