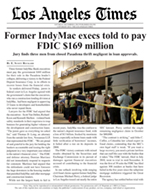 Nossaman Partner Tom Long is quoted in the Los Angeles Times article "Former IndyMac execs told to pay FDIC $169 million."  The article focuses on the verdict in which jurors found that three former IndyMac Bank executives had been negligent in approving 23 loans to developers and homebuilders who never repaid them.  Nossaman represented the FDIC in trial.

"The jurors gave us everything we asked for," Mr. Long was quoted as saying.  "We are proud of and grateful to the jury for holding the bankers accountable and issuing the right judgment in a very important case related to the nation's financial crisis."

The article points out that the Securities and Exchange Commission did not fare as well as the FDIC in its pursuit of damages against financial executives accused of contributing to the financial crisis when a federal judge threw out nearly the entire SEC lawsuit agains former IndyMac Chairman Michael Perry.

John C. Coffee, a Columbia law school expert in fraud claims, states in the article, "If you want a large recovery, you need a private law firm that can staff the case with the bodies that it takes."

The article also appears in the Pasadena Sun.