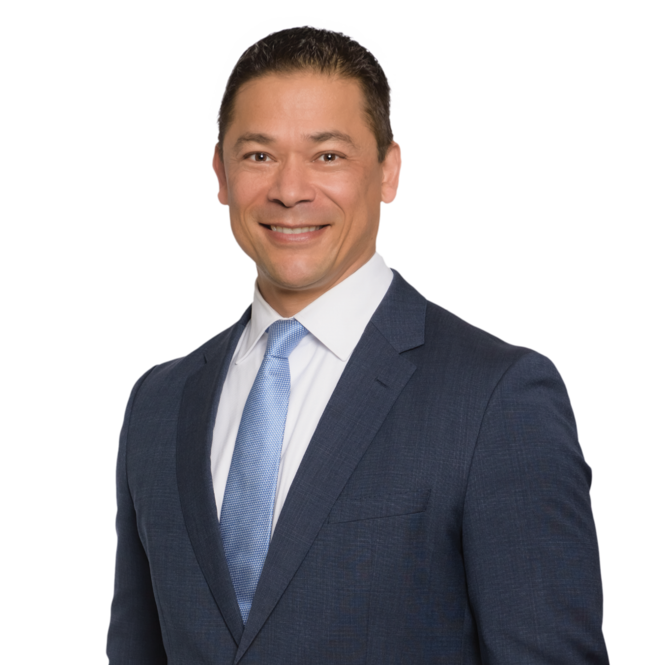 David Graeler serves as Chair of Nossaman’s Litigation Department and Co-Chair of its Real Estate Group. With nearly 25 years of litigation and trial experience representing both plaintiffs and defendants, David excels at partnering with his clients to identify their goals and to develop and execute winning strategies to effectively resolve complex business disputes both inside and outside the courtroom. Through the development of his civil trial practice, David has honed his ability to communicate and connect with judges and juries, as well as with clients, witnesses, and other attorneys.

David strives to learn and understand his client's business objectives, key issues and goals in order to develop a tailored strategy and obtain the best possible result. His track record of success in high stakes litigation in federal and state courts has earned him numerous awards and accolades, including a California Lawyer Attorney of the Year (CLAY) Award for litigation, recognition as co-lead counsel in securing a jury verdict that ranked among the National Law Journal’s Top Verdicts, and securing a spot as lead counsel for the Top Verdicts in California. David was also recognized by the National Law Journal as one of its Top 50 Litigation Trailblazers & Pioneers, and has been repeatedly recognized by the Los Angeles Business Journal as one of the 50 Best Litigators in Los Angeles and also one of the Most Influential Minority Attorneys in Los Angeles.

David focuses his practice on the representation of public and private sector clients principally in the areas of real estate, eminent domain, construction, and commercial disputes.

David is currently serving on the Board of Governors of the Association of Business Trial Lawyers and previously served as Chair of the Courts Committee, where he liaised with industry leaders from the bench and from various Bar associations. He also served on the Judicial Appointments Committee for the Los Angeles County Bar Association for numerous years, which assisted the California Governor in evaluating judicial candidates for the Los Angeles County Superior Court.

Federal Deposit Insurance Corporation as Receiver for IndyMac Bank, F.S.B. v. Van Dellen et al. This case was the first lawsuit filed by the FDIC in connection with the 2008 banking crisis, and followed an 18-month investigation into numerous complex residential acquisition, development, and construction loans that were made by IndyMac Bank, F.S.B. IndyMac failed in July 2008 and was one of the largest bank failures in U.S. history. After two and a half years of hotly contested litigation in federal court, pre-trial rulings eliminated all of the defendants’ affirmative defenses including the business judgment rule, mitigation of damages, regulatory conduct and the economy as a superseding cause of loan losses. David was one of three lead trial lawyers that took the case through a five-week jury trial. The nine-person jury returned a unanimous verdict on December 7, 2012 on all claims and awarded damages of nearly $169 million. The National Law Journal ranked the verdict as number 13 in its annual national Top Verdicts list. The verdict was also recognized by the Daily Journal in 2012 as having the most significant impact of any plaintiff's verdict in California and for being the second largest dollar verdict in the state.

Los Angeles Metropolitan Transportation Authority v. North Chandler Associates. David represented LA Metro in a rent adjustment dispute involving a long-term ground lease on property being used for an industrial /incubator complex. The primary issue was whether the land should be appraised at its highest-and-best use without regard to the time remaining on the lease or whether the property should be appraised according to the use chosen by the ground tenant. David served as lead trial counsel for a multi-day arbitration before a panel of three arbitrators that resulted in an arbitration award that exceeded LA Metro’s offer to settle.

Affinity Bank. David served as lead counsel for the FDIC as Receiver for Affinity Bank in an investigation into the failure of Affinity Bank that resulted in an estimated loss of $310 million to the Deposit Insurance Fund. This investigation resulted in authority to sue several former bank officers and directors in connection with losses resulting from large commercial loans. David negotiated a settlement for the FDIC shortly after filing suit in federal court.

Galpin Motors, Inc. David represents Galpin Motors and many of its related entities in a variety of real estate related matters and corporate disputes.

Eastern Columbia Homeowners Association v. Coast Prime Properties. Represented Coast Prime Properties in an action for breach of contract and declaratory relief stemming from a dispute between the tenant of a long-term parking agreement and the owner of the parking garage. Also represented Coast Prime Properties in a cross complaint for breach of contract, injunction, intentional interference with contract, and intentional interference with prospective economic relations. Successfully negotiated a structured settlement for Coast that resulted in a cash payment on its cross complaint and an arbitration process to determine market rent for a key rent adjustment. The arbitration process resulted in a substantial recovery for Coast and a market rent determination that was nearly double the amount offered by Coast early in the litigation.

Seafood Distributor. Represented a seafood distributor involving a breach of contract for the sale and purchase of custom-peeled, frozen raw shrimp. Negotiated a favorable resolution for the client pre-litigation after persuading the opposing side that its refusal to accept the goods sold was improper.

Savoy v. Burdette-de Cock Inc. Represented the defendants as lead counsel in an action for breach of contract, breach of employment contract, and negligent misrepresentation relating to a home senior care company. This case involved an emotionally-charged dispute between two business partners. David negotiated a favorable settlement at mediation that resulted in defendants making no out-of-pocket payment. In addition, the settlement resulted in the defendants’ employment practices liability carrier contributing a substantial amount toward the settlement and legal fees and costs.

Wham-O, Inc. v. Scott Burke, et al. Represented one of the defendants in an action brought by Wham-O, Inc. for misappropriation of trade secrets, breach of contract, intentional interference with prospective economic benefit, unfair competition, and computer fraud. After 18 months of hotly contested litigation, the case was resolved through a favorable settlement.

The Fellows of the American Bar Foundation, Fellow

Included in The Best Lawyers in America © for Eminent Domain and Condemnation Law, 2023

Named one of Los Angeles's Top 100 Lawyers by the Los Angeles Business Journal, 2022

Recognized as one of the “2022 Visionaries” in Commercial Real Estate, Los Angeles Times B2B Publishing, 2022

Named Professional of the Year by the International Right of Way Association (IRWA) Chapter 1, 2021

Named one of the Top Litigators & Trial Lawyers in Los Angeles by the Los Angeles Business Journal, 2018-2021

Named one of the Most Influential Minority Attorneys in Los Angeles by the Los Angeles Business Journal, 2018

Named one of the 50 Best Litigators in Los Angeles by the Los Angeles Business Journal, 2018

Recipient of the California Lawyer Attorney of the Year ("Clay") Award, 2014

In addition to representing clients in eminent domain litigation and trial, he also provides strategic advice and counseling to creatively resolve or proactively avoid disputes through effective project planning and implementation practices.

His track record of success in high stakes litigation in federal and state courts has earned him numerous awards and accolades, including a California Lawyer Attorney of the Year (CLAY) Award for litigation, recognition as co-lead counsel in securing a jury verdict that ranked among the National Law Journal’s Top Verdicts, and securing a spot as lead counsel for the Top Verdicts in California. David was also recognized by the National Law Journal as one of its Top 50 Litigation Trailblazers & Pioneers, and recently was recognized by the Los Angeles Business Journal as one of the 50 Best Litigators in Los Angeles and also one of the Most Influential Minority Attorneys in Los Angeles. Most recently, David was recognized by the International Right of Way Association as its Professional of the Year in 2021.

He frequently presents and publishes on news and policy impacting eminent domain in California and regularly contributes his insights to the Firm’s California Eminent Domain Report blog.

Los Angeles County Metropolitan Transportation Authority.  Currently serves as the Nossaman team leader representing Metro in acquiring property for a variety of projects including the Crenshaw/LAX Transit Corridor Project, a $2+ billion, 8.5-mile light rail line through the Crenshaw and Inglewood area; the Purple Line Westside Subway Extension Project, a $6+ billion, 9-mile subway extension through Beverly Hills and Westwood; and the Rosecrans/Marquardt Grade Separation Project, a project to improve one of the most dangerous intersections in California.  David also advised Metro on future projects such as the East San Fernando Valley Transit Corridor.

Port of Long Beach.  Represents the Port of Long Beach in myriad real estate and right-of-way matters including the rights and obligations under the Uniform Relocation Act (URA) and various contractual agreements the Port has with various tenants.  David also recently assisted the Port in analyzing lease provisions for a lease renewal involving oil pipelines and implications on its property given possible common carrier operations.

Port Authority of New York and New Jersey.  David represents the Port Authority on right-of-way matters for the high-profile LaGuardia AirTrain Project, which is a 1.5-mile-long people mover system and elevated railway in New York City.

City of Corona v. SJRK Investments. David represented both the property owner and sole business tenant in a condemnation action brought by the City of Corona for its McKinley Street Grade Separation Project. The City was acquiring a small portion of the land in fee, a small portion of the land as a permanent roadway easement, and a temporary construction easement. The owner presented a claim for compensation for real estate, including severance damages; and the business presented a claim for loss of business goodwill. The City’s original offer was $257,000. David negotiated a settlement with the City for compensation totaling $3,675,000.

The People of the State of California v. GPJCo Properties, LLC. David represents the property owner in a condemnation action brought by Caltrans to acquire a portion of a commercial property for a new onramp to the 405 Freeway. The primary issue is the amount of just compensation to be paid for Caltrans’ acquisition of permanent and temporary easements.

Los Angeles Unified School District.  Handled numerous condemnation matters for the District in connection with its massive school expansion program.  Encountered a wide array of relocation, valuation, and legal issues over the course of representation that spanned more than eight years.

County of Santa Barbara v. Coldwater Farms.  Represented Coldwater Farms in an eminent domain action filed by the County for a conservation easement.  The conservation easement threatened to acquire substantial quantities of oil owned by Coldwater as the owner of the mineral estate.  Successfully negotiated a settlement that resulted in the County limiting its acquisition to the surface and entirely preserving Coldwater’s mineral estate.