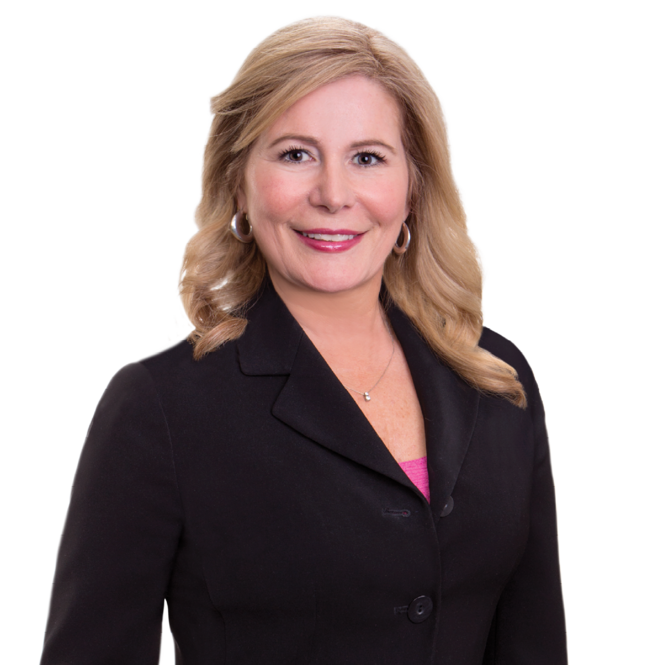 With over 25 years of experience, Patricia de la Peña has played a key role in delivering many of the largest transportation projects in Texas and the U.S through innovative methods. She assists clients in developing successful procurement strategies and documents, drafting and negotiating public-private partnership (P3) agreements and design-build contracts, toll-related contracts and contracts for goods and services. She also advises clients regarding federal and state compliance, insurance and contract administration issues.

Patricia has advised on various types of alternative delivery transportation projects, including transit, highway and bridge projects, as well as toll back office and service systems. For more than a decade, Patricia has been a key member of the legal team assisting the Texas Department of Transportation in development and implementation of the largest P3 and design-build program in the country. In addition to advising the agency on project development and implementation, she assists with contract administration issues and helps the agency develop standardized procurement and contract documents for design-build projects. She also is the leader of the team advising Houston METRO on updating its standard solicitation and contract document templates. Patricia co-authored the “Public-Private Partnership (P3) Procurement Guide" issued by the U.S. Department of Transportation in 2019.

Texas Department of Transportation – I-35 NEX Central Project. Leader of the legal team advising on the procurement of the first phase of a proposed $2+ billion design-build-maintain project to manage vehicle congestion, promote efficient use of existing transportation facilities and improve regional mobility along the heavily traveled I-35 corridor in the San Antonio area. This phase of the project includes approximately 9.5 miles of non-tolled improvements that will include the construction of elevated general purpose and HOV lanes and direct connectors and the reconstruction and widening of existing lanes and bridges, as well as other operational improvements. Patricia assisted TxDOT with the development of procurement and contract documents and the creation of state and federal compliance checklists to ensure the procurement and contract documents are compliant with applicable law.

Texas Department of Transportation – I-35 NEX South Project.  Leader of the legal team advising on the procurement of the proposed $630 million design-build-maintain project that is part of the overall plan designed to improve regional mobility along the heavily traveled I-35 corridor in the San Antonio area.  This phase of the project includes approximately four miles of non-tolled improvements that will include the construction of elevated general purpose and HOV lanes, direct connectors and elevated transitions, as well as other operational improvements.  The final RFP was issued to the three shortlisted proposers in November 2022. Patricia is assisting TxDOT with the entire procurement process, including development of the procurement and contract documents, and overall procurement strategy.

Texas Department of Transportation – SH 249. Leader of the legal team that advised on the procurement of a $400 million design-build-maintain project to enhance connections between Houston, Bryan/College Station and Waco. The approximately 24-mile tolled facility includes an initial segment with up to four new managed lanes and a second segment consisting of two new toll lanes. The project currently is under construction. Patricia’s duties involved drafting procurement and contract documents, including the RFQ, RFP and design-build and capital maintenance agreements.

Texas Department of Transportation – 2020 Toll Systems Integration and Maintenance Contract. Leader of the legal team that advised TxDOT in the drafting and negotiation of a new toll system integration agreement for the design, development, integration, testing and maintenance of TxDOT’s state-wide toll system. Patricia is currently assisting with implementation of the relatively new contract.

Texas Department of Transportation – SH 360. Leader of the legal team advising on a $625 million, 9.7-mile tolled extension to relieve stress on highly congested roads in the Dallas/Fort Worth area. The $300 million initial phase of the project includes a four-lane divided tollway and two divided lanes. Construction began in fall 2015 and was completed in 2018. Patricia was responsible for the development of the procurement documents, as well as drafting the design-build and comprehensive maintenance contracts. She also assisted the agency through the evaluation and selection process and is currently assisting with ongoing contract administration.

Texas Department of Transportation – Border West Expressway. Leader of the legal team that advised on an approximately $640 million design-build project to complete Loop 375 encircling the City of El Paso. The 9-mile roadway, which opened in 2020, aims to provide an alternate route for I-10, addressing needed improvements in highway capacity, reliability and regional system linkage for the El Paso metropolitan area. The project, the largest transportation undertaking in the city’s history by cost and complexity, includes a new 5.6-mile, four-lane controlled access highway. Patricia is currently assisting with contract administration.

Texas Department of Transportation – North Tarrant Express Segments 3A & 3B. Leader of the legal team that advised on the second phase of an innovative highway improvement and managed lanes public-private partnership to alleviate heavy congestion in the Dallas/Fort Worth area. Patricia assisted TxDOT in negotiating a 2013 concession agreement and with commercial and financial close for the award-winning $1.5 billion Segments 3A & 3B portion of North Tarrant Express. The project includes rebuilding general-purpose lanes and two new managed lanes, doubling the existing roadway capacity. Construction of both segments was completed in 2018.

Texas Department of Transportation – North Tarrant Express Segments 1 & 2W. Key member of the legal team that advised on the first phase of a project to improve mobility in the Dallas/Fort Worth region. Segments 1 & 2W comprise a $2.05 billion piece of North Tarrant Express public-private partnership – a managed lanes project that fixed existing highway infrastructure and double existing road capacity. Patricia assisted with the procurement of a 52-year DBFOM concession agreement to complete Segments 1 & 2W and a pre-development agreement to develop plans and concession agreements for the potential development of additional segments in the corridor. The initial segments opened in October 2014 – six months ahead of schedule.

Texas Department of Transportation – LBJ Express. Key member of the legal team that advised on a critical project to relieve pressure on a congested 17-mile corridor in the Dallas Metropolitan area. We guided procurement of a DBFOM toll concession for the $2.7 billion upgrade, one of the largest public-private partnership undertakings in U.S. history. The award winning LBJ Express, the first transportation upgrade to receive federal tolling authorization under the Express Lanes Demonstration Program, reached financial close ahead of schedule in 2010 and completion in 2015.

Texas Department of Transportation – Statewide Back Office Services Contract. Leader of the legal team that advised on the negotiation of a toll back office service contract to provide transaction processing, billing and customer service interface that supports electronic toll collection, image or video tolling, as well as violations and collections processing for the statewide highway tolling system. The system will be interoperable with all Texas tolling authorities, Kansas and Oklahoma and ultimately comply with the Southern States Interoperability and National Interoperability requirements.

San Bernardino County Transportation Authority – I-10 Corridor Contract 1. Leader of the legal team advising on the development and procurement of a design-build project to add toll express lanes along the I-10. The $600 million upgrade will feature 10 miles of managed lanes with two tolled express lanes in each direction. Patricia's responsibilities include drafting procurement and contract documents, representing the Authority in one-on-one meetings, drafting responses to proposer questions, assisting with evaluations and negotiation of the toll services contract.

Puerto Rico Highways and Transportation – Electronic Toll Collection System/Customer Service Center. Key member of the legal team advising the Authority on its procurement of a new toll services provider for the various toll roads and toll bridges owned by the Authority. The resulting contract will address development, installation, integration, testing and maintenance of the back office toll processing system and all customer interface and payment services (the roadside system will be addressed by a separate procurement). Patricia was responsible for drafting the procurement documents.

City of Austin Department of Aviation – Austin Bergstrom International Airport Capital Improvement Program. Co-leader of the team advising the airport in developing plans and strategies for the procurement, delivery, financing, operation and maintenance of the projects included in the airport’s approximately $4 billion capital improvement plan. This work has included a detailed analysis of Texas procurement law, including the airport’s legal authority to utilize various delivery methodologies and funding mechanisms, and other strategic program delivery advice.

Metropolitan Transit Authority of Harris County, Texas – Procurement and Contract Templates. Leader of the legal team advising METRO on the extensive revision of its standard solicitation and contract templates to, among other things, ensure compliance with state and federal law and METRO’s policies and procedures, as well as to update general provisions, including those relating to indemnification, disputes, default, remedies, changes, force majeure, public information, termination, warranties, intellectual property and privacy.

Metropolitan Transit Authority of Harris County, Texas – Automated Fare Collection Services Contract. Leader of the legal team advising on the negotiation of an automated fare collection system contract to replace METRO’s current system with an open, account-based system for its light rail, local bus, commuter bus and paratransit services. This will provide customers with an expanded retail network and mobile application system that will integrate with future fare collection systems and enable interoperability with regional partners.

Metropolitan Transit Authority of Harris County, Texas – METRO Solutions Phase 2. Member of the legal team that advised the transit agency on a project to extend the Houston METRORail system. The first leg of the system, the 7.5-mile long Red Line, boasts one of the highest ridership rates in the country since opening a decade ago. METRO Solutions Phase 2 is a $1.46 billion project to design, build, equip, operate and maintain three additional rail lines. The Authority awarded a development agreement to Parsons Transportation Group Inc. and a design-build contract to a Parsons/Granite/ Kiewit joint venture with vehicles acquired from CAF USA Inc. The Red Line northern extension opened in December 2013 and the Green Line (East End) and Purple Line (Southeast) began service in 2015. Patricia’s services included advising on the turnkey contract to develop the project, assisting with development of procurement and contract documents, and working on insurance issues.

City of Indianapolis – Marion County Justice Center. Member of the legal team that advised on all aspects of an innovative availability payment P3 project to consolidate the City’s criminal justice functions into a single efficient center. The plan, one of the first of its kind for a justice complex, called for $500 million of up-front design, construction and financing costs to shift to a private partner responsible for operating, maintaining and upgrading the facility for 35 years. The 1.2 million-square-foot facility combined a new adult detention center with a community corrections facility, courthouse, sheriff’s department offices and new surface parking. The City released an RFP to three shortlisted teams in June 2014 and selected a preferred bidder in December 2014. After successfully completing negotiations with the bidder, the mayor and City staff recommended awarding the project and advancing with commercial and financial close. The City Council, however, decided not to move forward with the complex and cancelled the procurement after receiving three compliant bids.